What’s in the pipeline for HGV and LCV fuels?

Readers of my posts won’t need to be reminded that diesel-powered freight transport is one of the most – if not the most – important parts of the global economy. Whole books have been written about how quickly society would fall apart in the unlikely event that trucks ever stop running.

This dependence on trucks and LCVs, and in turn their current reliance on diesel engines, has kept freight low on the agenda for decarbonising transport, though we shouldn’t overlook the enormous reductions in freight vehicles’ pollution and fuel consumption over the last two decades.

Below: how NOx and particulate emissions limits for HGVs have fallen since 1992 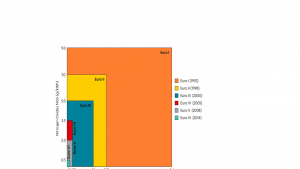 Even so there would be little point banning new petrol and diesel cars from 2040 if freight remains almost 100 per cent diesel-powered. If that happens, we’re told, road and rail freight’s share of UK greenhouse gas emissions would rise from six per cent today to around 20 per cent of allowed emissions in 2050.

It’s a critical issue for fleets and UK businesses alike. One which calls for the kind of coordinated, forward-thinking approach from the government that’s been so frustratingly lacking around Brexit and company car BIK over the last three years.

Now, a detailed proposal for future UK freight transport planning has been put forward by the National Infrastructure Commission (NIC).

The report says the government must…

”…set the trajectory for a clean freight system, outlining clear, long term objectives that enable the industry to be zero emissions by 2050.”

Fuels, fuelling infrastructure and, significantly, data aggregation are key areas for future government action the report says. It sees data as vital to improving congestion and capacity – which, along with carbon, make up the NIC’s ‘three Cs’.

It wants to see a new national freight data standard implemented by 2020. This will provide local authorities and other freight stakeholders with “good, useful data that can inform priorities and decisions” in much the same way many businesses use TMC’s presentation of consolidated data from different sources, e.g. mileage capture, telematics and fuel usage, to find new ways to reduce their fleet and travel costs.

On freight fuels, the NIC report discusses synthetic diesel, biofuels and e-highways (overhead electric wires) as potential routes to zero-emission HGVs. But batteries and hydrogen look most promising, it says.

Hydrogen, though less energy-efficient and therefore more expensive than electricity, may eventually win out as the preferred energy system for heavy road freight because it will permit higher payloads than the equivalent weight and volume of battery storage.

The report notes that a completely new hydrogen production and refuelling infrastructure would need to be built along the UK’s freight arteries. One can foresee LCV and car operators turning to hydrogen vehicles to take advantage of it, although hydrogen fuel’s likely price premium over electricity will call for careful data analysis to identify where time/payload considerations would justify the higher cost of hydrogen.

An important take-away from the NIC report is that managing zero-emission freight fleets is going to call for more real-time consolidated information. Certainly much more than the (comparatively) straightforward business of running today’s commercial vehicles on diesel.