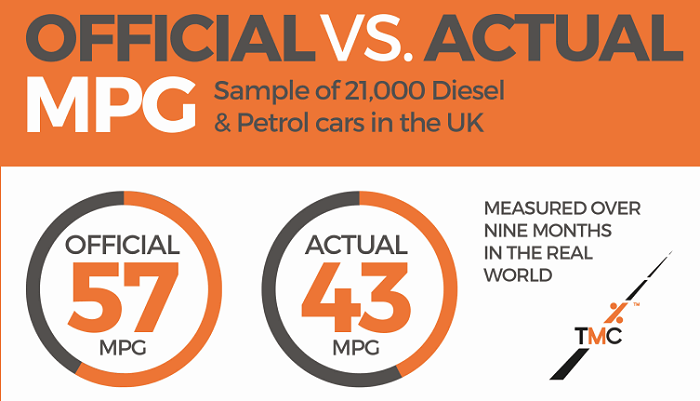 TMC crunched mileage and fuel data from 21,200 fleet cars to quantify the impact of the widening gap. The analysis compared each individual car’s official mpg figure with its actual performance, logged on TMC’s database of fuel transactions and mileage reports.

Diesels used 28% more fuel on the road than under official test conditions, on average; up from 25% the previous year. Although overall advertised consumption of the diesels in the sample improved from 62 mpg in 2015 to 66 mpg in 2016, their economy under real-world conditions improved by only 0.9 mpg.

As well as increasingly understating real fuel costs, the officially-published data paints a too-optimistic picture of exhaust emissions. The ‘real world gap’ measured by TMC equates to nearly using £1,800-worth more in fuel and emitting 2.4 tons more CO2 per car over a typical fleet leasing cycle of 60,000 miles.

“In this sample alone, we are looking at a total annual discrepancy of around £50 million in fuel costs and 17,000 tons of CO2,” said Paul Hollick, managing director of TMC.

“The question businesses should ask themselves is whether it is still commercially or environmentally sustainable for them to rely on official figures that are 30% adrift when, these days, they can easily build fully-accurate, real world data about their fleet assets into policy and operational decisions. Of all the factors affecting real-world fuel economy, drivers are undoubtedly the largest influence. Our data enables employers to identify the worst performers and target them for training or other methods of improvement.”

Mr Hollick welcomed the forthcoming introduction of a new mpg/CO2 test cycle that has been designed to be more representative than the current, 30-year-old, cycle. But he cautioned that official mpg and CO2 benchmarks will continue to be obtained under artificial conditions.

“Nothing can beat the value of real-world information from your own assets,” he added. “In 2017, every fleet can obtain the tools to capture it and use it to drive cost savings and higher productivity.”

TMC provides clients in the UK and Europe with a range of cost-reduction, data analysis and consulting services around business vehicles and employee mobility. The company derives it real-world mpg information from consolidated data it holds on thousands of vehicles’ mileages, fuel consumption and technical specifications.